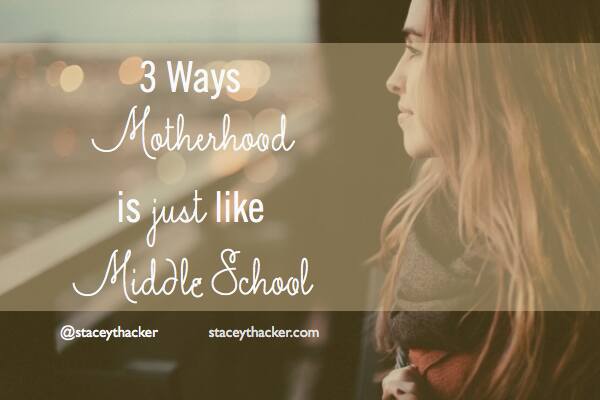 When I was in 6th grade I made an epic fashion mistake. Lured by promise of looking just like one of Charlie’s Angels I asked my mom, my personal hair stylist, to cut my hair. But this would not just be any hair cut. I wanted my hair to “feather” on the sides. If you are not a child of the 1980’s you may have no idea what this means. It was the definition of cool where your hair would stay beautifully wind swept on the sides for hours. Oh there might be Aqua Net involved, but wind swept was worth it.

There was this one girl in my school who had the most perfect hair. I think her hair decided on the first day of middle school to feather on its own. I tried everything to look like her. It just wasn’t meant to be I suppose.

My hair never did feather.

I fumbled my way through those years trying to be seen and also trying to hide at the same time. Neither worked very well.  Lately I’ve been thinking about how motherhood is just like middle school some days. Maybe you can relate:

I was a smart kid and a hard worker. But book smart did not necessarily translate to socially smart. I remember being pretty comfortable during class time but the hallway was a whole different story. The bell would ring for us to move classrooms and suddenly it was like walking though my worst nightmare because “BOYZ” and “Cool Kids” and all the walking from one place to another.. Worse yet, I might actually have to get from point A to point B alone without my BFF. I mean can you feel yourself sweating?

Mothering has a way of magnifying awkward insecurities. When I brought my first baby home I had the thought ringing in my head, “Do they KNOW I’m taking her home? What in the world do I do with this tiny human?” I looked into her intense blue eyes and tried like crazy to make her hair cooperate (she is so related to me) and I had those same feelings of “Can I really do this?” These days, I look at that same girl, now eighteen  and I think pretty much the same thing. “How in the world did we get here and how do I manage the next couple of years before the whole game changes?”

What is worse than failing? Failing in front of others. Awkward insecurity may keep you from trying, but fear of failure will probably cause something else to happen. You will work twice as hard to make sure no one sees you are struggling. Just keep moving, and make sure no one knows what is really driving you.

Fear is a nasty task master.

I had a coach in 7th grade  who was big on rules. They weren’t bad in and of themselves, but for a girl like me who was eager to please everyone these rules became my haven. If I just did ” it” all right everything would be fine.

I worked myself into a fit trying to avoid failure. I still do at times. When your biggest fear is failure, things like rest and peace tend to get lost in the mix. Girls can I tell you a secret? I still mentally check off those same things on Mondays while sipping my over creamed coffee. Only the coach is in my own heart. The struggle is real.

The hair feathering fiasco set me up nicely for more than  a few years of wondering if I would ever be chosen.

“See, I know what it feels like to be passed by and ignored. My first memory of being passed by was in the eighth grade. I was one of the only girls not to have a date to our eighth grade dance. I really wanted one particular boy to ask me. But he chose someone else. I thought about staying home that night and watching a movie instead, but my mom encouraged me to pick out a pretty dress and go anyhow. She bought me a pink corsage and I cried when she pinned it on me.” (from  the Hope for the Weary Mom Devotional)

Undesirable is a deeply felt emotion.

Is it any wonder this showed up again in my mothering years. It is so easy to fade into the background of your own life as a mom and play the wallflower. There is more to the story from 8th grade and I’d love to share it with you. (**see below). But for now know this, that same girl who felt those things back in 1985 still pushes back feelings of being undesirable, passed by, and picked last. I felt those things all within the last 24 hours. Who wants a weary mom, who looks tired, is busy raising four vibrant girls and can’t quite keep her shopping list down to one trip per week?

Who wants that girl?

He whispers over my awkward insecurities: blameless

He persists on telling me when I fear failure: free

He shouts over the voice that cries undesirable: chosen

“God chose us to be in a relationship with Him even before He laid out plans for this world; He wanted us to live holy lives characterized by

love, free from sin, and blameless before Him.” 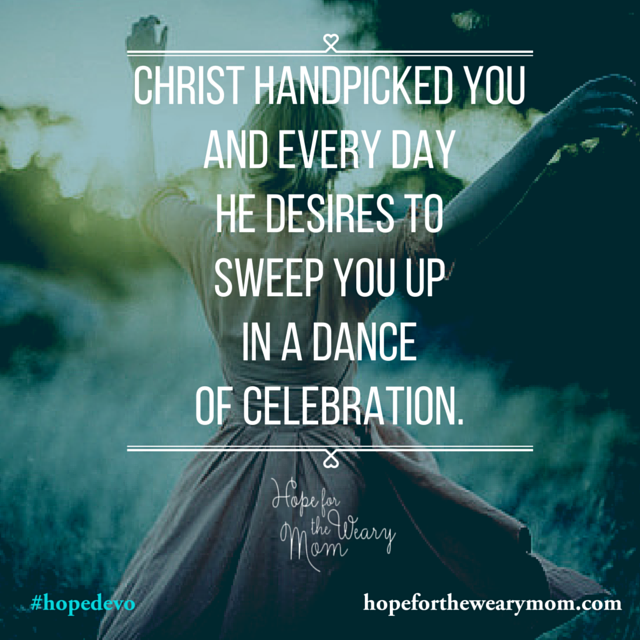 And on the days my heart is ready to receive it, we dance in the kitchen even though my hair still isn’t close to feathering. 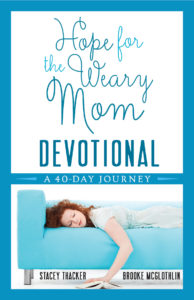 ***There is more to this middle school story contained in one of the devotions from my new book (co-written with the lovely Brooke McGlothlin) called the Hope for the Weary Mom Devotional: A 40 Day Journey. Find out more about this book for moms here.

Go BEHIND the SCENES with ME! 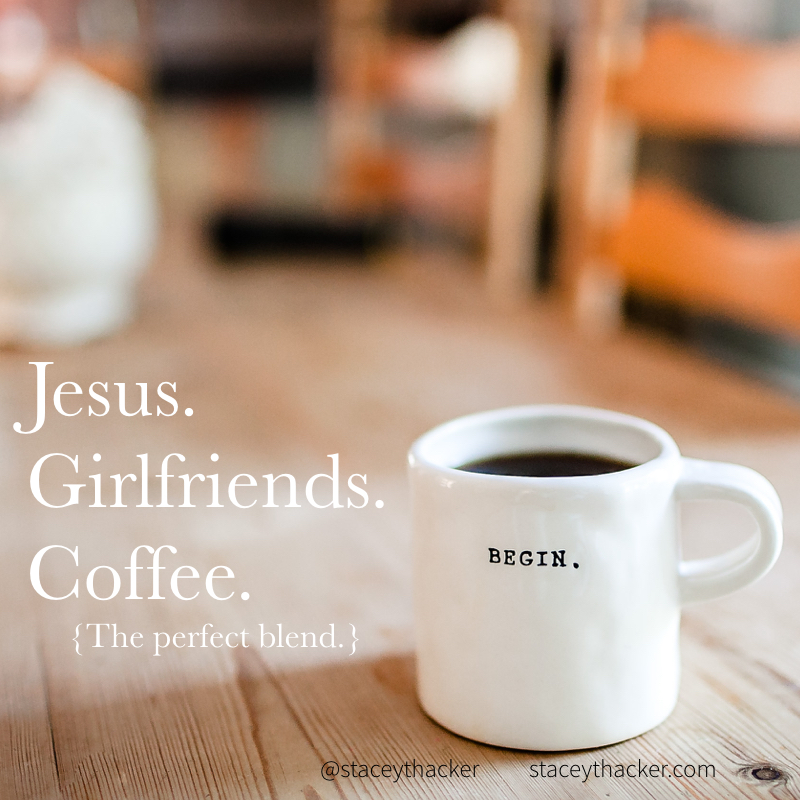 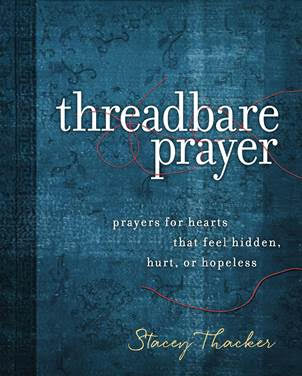 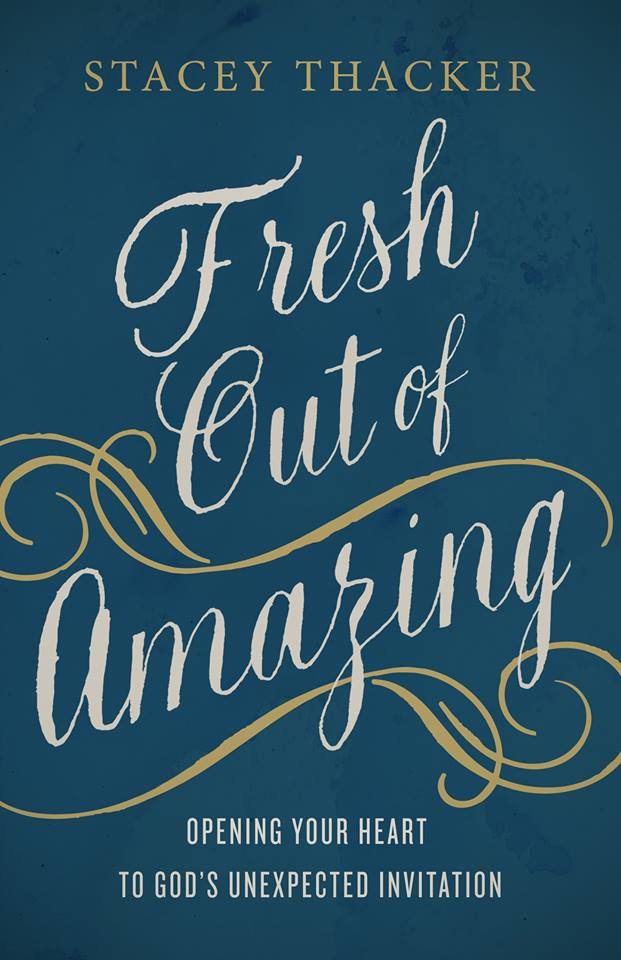